Charge All the Things, With the Mophie Powerstation Hub

Charge All the Things, With the Mophie Powerstation Hub 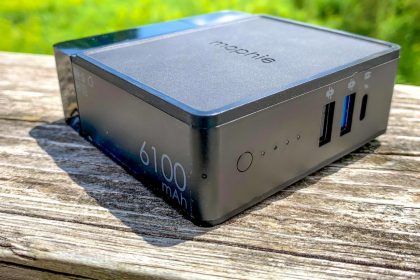 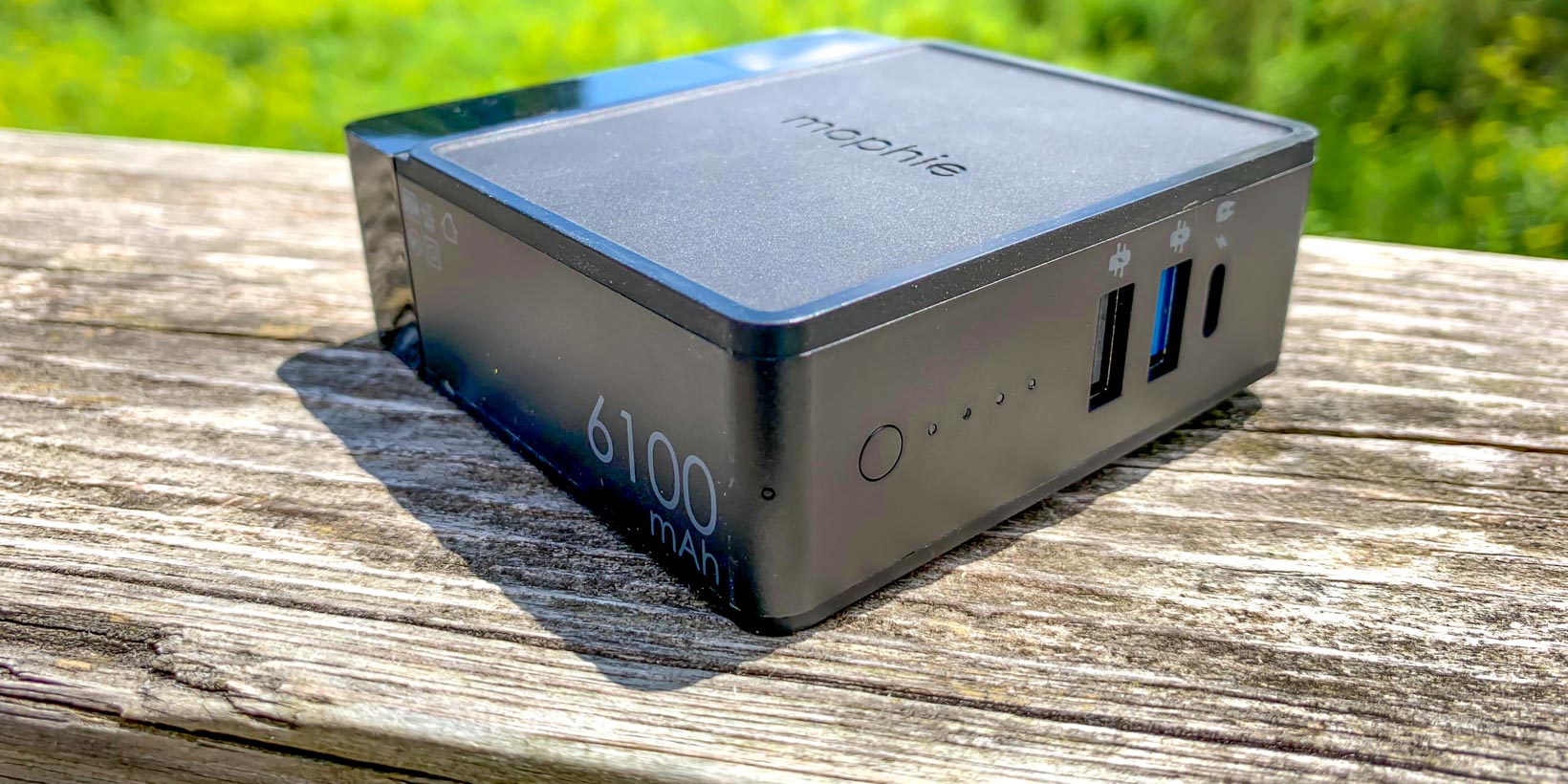 Back when phones were measured by how thin they were instead of how smart they were, you could get by without a charger. Even a few days out of town may not be a problem. Unfortunately, those days are behind us now.

Part of this is because we travel with more. You don’t just carry your phone. You carry wireless headphones, maybe a smart watch, maybe even a tablet too. If you want to keep them topped up, you’re going to need more than a standard charger. Meet the Mophie Powerstation Hub, and at the end of this review, we’ve got one to give away to one lucky reader. Find the entry form at the bottom of this review.

What’s So Different About the Mophie Powerstation Hub?

From the look of it, you might think the Mophie Powerstation Hub is a standard wall charger. It’s perfectly happy to function that way as well, plugging into the wall and offering up three USB ports. That is just the start of what it can do.

Pull the charger out of the wall, and it keeps on charging your devices, thanks to its internal battery. Turn it on its side and it has another surprise as well: it also functions as a Qi wireless charger. All that is tucked into one relatively small box.

What’s in the Box? The box holding the Mophie Powerstation Hub is probably larger than it needs to be. Open it up and you’ll find the Hub itself and the Quick Start guide tucked behind. That’s it.

Because the device charges by plugging it into the wall, it doesn’t even ship with a charging cable. If you’re looking to pick up an extra USB-C cable, we can help you buy one that won’t fry your devices.

The battery built into the Powerstation Hub has a capacity of 6,100 mAh. This isn’t as big as some battery packs on the market, but it’s also plenty for most devices. That’s enough to charge an iPhone X one to one and a half times, and other phones once or twice.

Mophie claims the Powerstation Hub can provide up to 36 hours of extra battery. Since it can charge up to four devices at once, that might be spread out a little.

Where the Mophie Powerstation Hub really shines is in just how many ways it can charge your devices. Of the three ports on the front, two use the USB-A standard. Either one of these can provide up to 15 watts for QuickCharge-enabled devices, but only one at a time can do this.

The USB-C PD port works both ways. It can charge devices faster than any other port on the charger, delivering up to 18 watts. But it can also charge the Powerstation itself, which is handy if you want to charge up the battery with your MacBook charger. While the Qi wireless charging platform on the device is the handiest way to charge, it’s also the slowest. It only provides five watts of power, so this is best for topping off your phone. On the plus side, you can use this plus the other ports to charge four devices at once.

Despite all this talk of wattages and quick charging, there are some limitations. The main one is that if you’re charging more than one device at a time, the Powerstation Hub is limited to a total of 18 watts. This is across all devices, so while you can charge multiple devices, the more you add, the longer they will take to charge.

When you recharge the Powerstation Hub, you can expect a full charge to take from two to two and a half hours. In using the charger, I didn’t notice much of a difference whether I was recharging via the built-in prongs or using the USB-C port. If you need to charge your devices but also the charger, that could be a problem. At least, it would be a problem with other devices. The Powerstation Hub handles that with what it calls “Priority+ charging”. This provides power to your devices first, then uses whatever is left to charge the Hub’s internal battery.

You may have noticed that the Powerstation Hub looks similar to a laptop charger in photos. It looks that way in person too. It measures 3.31 inches square and is 1.16 inches thick, which makes it just slightly larger than an 87 watt MacBook charger. It’s somewhat more rectangular as well. The Mophie is a little lighter than the MacBook charger and feels like it would handle a drop about as badly. I didn’t want to test this to find out what would happen. I imagine that while I might have lucked out, it could have also gone very wrong. This is certainly not a rugged charger.

The ports are located on the front, assuming you think of the area that the power prongs flip out of as the back. This is similar to how any standard USB charger would work and is the best place for them. On the bottom, they would be too awkward to access, while on top you would end up pushing the charger out of the wall plugs while plugging cables in.

The Mophie Powerstation Hub in Action

The simplicity of the build is reflected in how easy the Powerstation Hub is to use. When it’s plugged in, you use it exactly as you would any other charger.

When the charger isn’t plugged in, you use it almost the same way. Just press the button on the front for a few seconds, then plug in your device. If you’d rather use wireless charging, simply place your phone on the charging platform. Wireless charging has gotten much better in the last few years, but can still be problematic with some chargers. Fortunately, that wasn’t the case here, as it worked well with multiple phones, even with thick cases. The single button performs every function you need to handle with the Powerstation. Tap it and it will indicate how much battery life is left. Hold it for a few seconds with USB-C plugged in and it will activate Priority+ charging.

There is one slight problem when it comes to wireless charging. You can’t use it when the Powerstation Hub is plugged into the wall since the platform is on the side. You can remedy this either by carrying a short power extension cable or by powering up the Powerstation via USB-C.

Of course, even if the plug were rotated by 90 degrees to allow access to the wireless charging platform while plugged in, using it would be impossible. Because of the weight of this charger, it already feels heavy when plugged into the wall. Adding the weight of a phone on top would be enough to pull it out of the wall.

What Won’t It Do?

Despite how much it looks like a laptop charger, the Mophie Powerstation Hub won’t, in fact, charge your laptop. This is understandable, but given that it has a plug for a power outlet and a USB-C port, it would have been nice to see. Speaking of which, three ports is a generous number, but as the world is rapidly moving toward USB-C, it would have been nice to see more of these ports. This is especially true as you can charge the Powerstation Hub via USB-C. Yes, there are adapters and cables available that can handle this for you, but as the one device to rule them all, you shouldn’t need adapters.

As mentioned above, there are no cables included, so you’ll need to provide your own. This isn’t a problem, as many of us already likely have more cables than we’ll ever need, but for the price, it would also have been nice to see at least a basic cable included.

Is This the Right Charger for You?

You’d be hard-pressed to find anyone who denies that the core idea of the Mophie Powerstation Hub is a good one. I’d go so far as to say it’s a great idea. The only shame is that it doesn’t have more power In a time where we regularly see chargers with 20,000 mAh batteries, 6,100 mAh seems on the low side.

That said, the smaller battery does make the device easily portable. I own several chargers, and while the Mophie is slightly thicker to accommodate its plug, it’s still as portable as any of them. Considering how much it can do, it’s surprising how portable it is.

If you’re planning to charge all of your devices at once, you may feel somewhat let down by how quickly the battery runs out. You can charge it back up easily, but it will still run out quickly if you charge multiple devices. If instead you think of it as a Swiss Army knife of chargers and use it to charge one at a time, you may be much happier with it.

The Mophie Powerstation Hub is a perfect fit if you feel like you need several devices but only want to buy one. At $ 99, the price is higher than other chargers, but given the feature set, it doesn’t feel unreasonably high. This charger doesn’t do everything perfectly, but because it does so much, that doesn’t matter.

Read the full article: Charge All the Things, With the Mophie Powerstation Hub 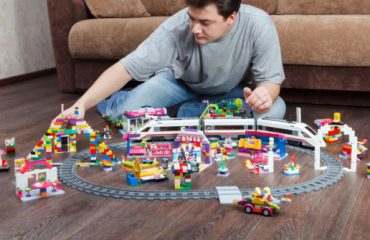 5 Tools for LEGO Fans to Geek Out Over Bricks 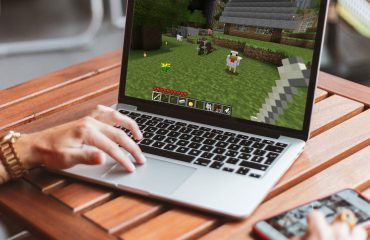 5 PC Games You Can Continue Playing on Mobile